Trick or Treat: Week One and a Half 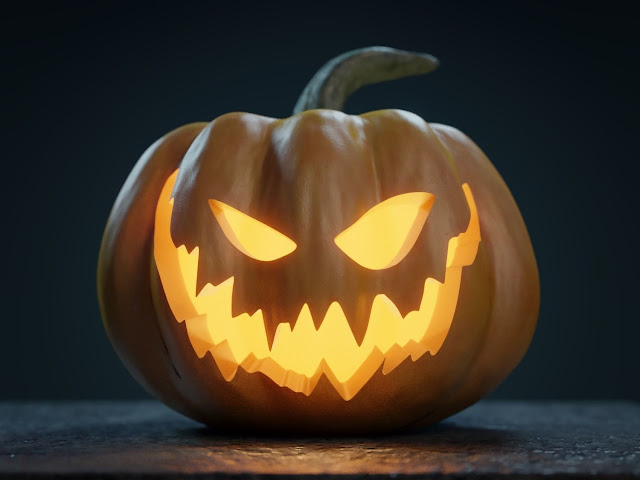 From September 1st to October 31st with some exceptions, I'll be mainly doing my Halloween viewing. Here are all the scary flicks that I've watched already. 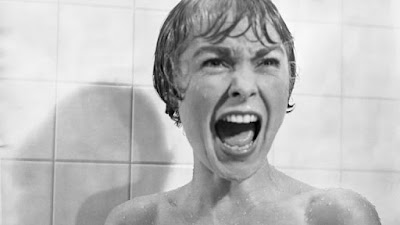 My Halloween viewing officially begins here. Technically it already began two nights before rewatching this with John Carpenter's Prince of Darkness and a Bette Davis double-bill in Whatever Happened to Baby Jane? and Hush...Hush Sweet Charlotte. But I'm officially stating that I began it by seeing my favorite scary movie on the big screen (again, and the day before my own mother's Birthday.) And what more can I say about this that hasn't already been said? It still amazingly mostly holds up 59 years later, due in large part to Hitchcock and how he ingeniously takes us for a ride with some of the best twists and turns that have ever been thought up. The performances, for the most part, are still fun, but it's really only Anthony Perkins who still holds up today (though Martin Balsam has always given my favorite detour.) He's alongside Bernard Herrmann for iconic contributions that are still timeless. And it has a perfect example of how to structure a story perfectly. Ok, now I've definitely said things that have without a doubt already been said since forever. But it's a movie I'll never not go a little mad for sometimes/always and will frequently want to check into this motel. My favorite scary movie as well as my favorite movie from my favorite filmmaker. 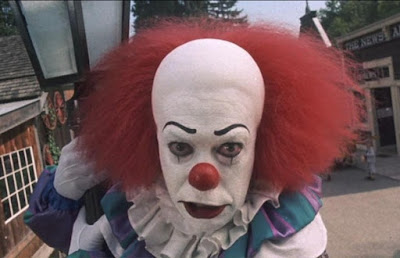 What a ridiculous turn around.
The last time I watched this (before the release of the 2017 one, naturally) I whined about how little Tim Curry is actually in this as Pennywise, the dancing clown. But rewatching it now (before rewatching the 2017 one and the upcoming chapter two) I realized properly that in the opening credits that Curry is credited as a "Special Appearance." So I should have been prepared. And even if he's still not in it much, his presence sure is.
If you can get past the dated and sometimes horrendous acting (except Curry, naturally, and John Ritter) you can enjoy it more. This came out a year before I was born, so I didn't really grow up with it and didn't see it until my late teens so I can't say that I have nostalgia for it. But, like most adaptations of Steven King's work I enjoy it for how silly it is and can get a laugh out of it. It definitely would have been more enjoyable if Curry was used more, but it didn't bother me so much this time around. 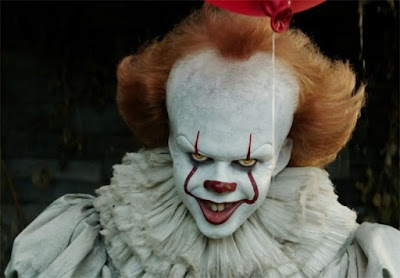 One of the better updates of recent horrors. With quite possibly the best child cast ever assembled (Goonies, you should say die!) Bill Skarsgaard also a hoot with his creepily bonkers turn of Pennywise. I may prefer Tim Curry's (even though Bill gets way more time) but this theatrical version is otherwise leaps and bounds over that. It knows when to be effective. It knows when to be fun and silly. There have been horror flicks since that has been great. There have possibly been horrors that have been better since too, but this is the last one that I really truly adored. Almost up there with Carrie and The Shining (sorry King) but certainly in Misery territory for best adaptations of his work. 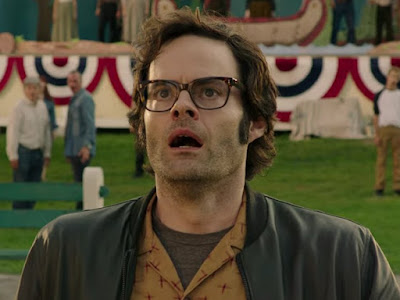 Ridiculous and very silly. Ups the insanity and is devoted more to being a horror-comedy than the endearingly down to earth horror with some comedy from the first. Though to be fair it's kind of to be expected when you cast very funny man Bill Hader as the comedian of the group. He effortlessly steals the film, and while I don't really buy into the Oscar praise that I have been hearing as he's way more funnier than he is serious, it's still Bill being Bill, and anytime to see that is just awesome. And I mean if Melissa McCarthy could be nominated for Bridesmaids then why not give him a nod too? (though they won't.)

I may prefer the first, but this is still a heck of a lot of fun. Like a circus freakshow. Packs a lot into it's near 3-hour running time (almost as long as the TV version) but it uses it's time effectively that if you're enjoying it, it should honestly breeze by (I should know, having double-billed it with its first installment.) Some of the humor doesn't work (one ridiculous music edit in particular) and the film relies way too heavily on CGI, but Pennywise is in it more (both a plus but also kind of a detriment as overusing him can defang him) however, it does neatly complement its predecessor and wraps itself up so nicely like a fine tale (that only a King could have come up with) that it pretty much works. I was able to float again. 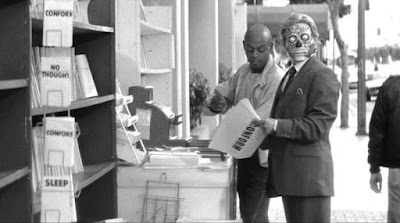 John Carpenter's best satire by a fucking mile! It kicks ass and does it as effortlessly as chewing bubblegum. Like most of his flicks, it goes for the slow-burn but once Bill Paxton, sorry, Roddy Piper sees the truth out there then the film goes nuts and never stops. Endlessly ridiculous (with just as many ludicrous lines) yet a ton of fun that hits you as hard as Piper and Keith David do in their hilariously violent fight. I'm almost tempted to dethrone The Thing. Almost. I found it that entertaining. Simply an off the wall delight that although is a little messy and sometimes doesn't stick the landing is also way too enjoyable to give it a pass as well. 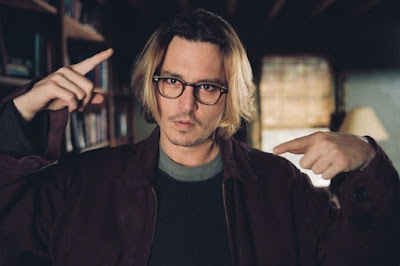 This could have been one of the better King adaptations if it was done by a better hand. It's got a good lead, and a good villain, but the film's look and aesthetics make it look cheaper than it is and whether I already saw it somewhere years ago, the twist is fairly predictable either way. But it is ideal Halloween viewing though. 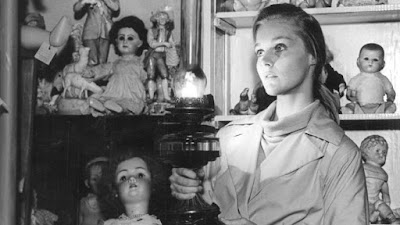 Deeply unsung 60s thriller with a stunning, wholly believable performance from the recently departed Carol Lynley, who is truly put through the wringer in this extremely nightmarish situation that no mother (or parent) would ever want to have happen to them. Having it in black and white, and having everyone but Lynley and Lawrence Olivier either be indifferent to her plight or just straight-up strange in her new surroundings of swinging London helps add to the eerie atmosphere Otto Preminger nicely delivers, even using a tune from The Zombies as a tool for intensity. Underrated would be understating it. If you've never even heard of it but are interested in plots like these or in the talent involved, seek it out, especially since it's star only just left us. It's ridiculous that it took in honor of her death to finally check it out. You may also not be able to view Dave from 2001: A Space Odyssey the same either.

Trick or Treat: A lovely surprise of a treat.

Popular posts from this blog

August 31, 2019
It's spring, sir! New season, and a new start, where the cold bitterness of winter begins to dry up and we can all begin to see clearly now.

And what better time to both continue my Breaking Bad binge (in anticipation for El Camino, naturally) as well as begin my Halloween viewing for the next two months, and to also delve deep into the filmography of one Dan Hedaya.

There will be thoughts and opinions, bits and bobs, whatever can relate to these (and also what can't) will be put right here for your possible reading pleasure. You can join me in my endeavors if you so please (or don't, it's your life) or you can just read about it if you want (up to you.) But either way, I'll be documenting it all whether anyone's interested or not. So let's break out the crystal blue, go a little mad and let the festivities begin!

September 27, 2019
As far back as I can remember I've always been known as "the film guy." It's what I'd like to be known most for honestly. Sure, it's lovely if I'm known for being something else (lovely son, devoted friend, fun brother, etc.) It's nice to be nice to the nice. But in a kind of Scorsese, Tarantino, Rain Man, Abed and Radar O'Reilley kind of way I'd love to be thought of first and foremost as "the movie guy." And for pretty much all my life I have. I could typically list off any film (or show) that anyone was stumped on, and usually, I'd seen it. As I "matured" and befriended more interesting people during my last year's in high school it got a little more difficult, but I was still fairly knowledgable in this field (and would like to still think that I am.)
I was at my best friend's place. It was either 2012 or 13. Other friends were there too. One of them happened to have brought up seeing something as a kid tha…
Post a Comment
Read more